Can Pro-Lifers Shop from Businesses that Support Abortion?

As pro-life advocates, the thought of handing over money to a business that makes substantial donations to Planned Parenthood or other players in the abortion industry is unsavory, to say the least. And, to be fair, whenever something seems ethically murky, it tends to be safest to err on the good side. You won’t be catching us condemning anyone for choosing Dunkin Donuts over Starbucks for political reasons.

But when it comes to abortion-supporting businesses, the pro-life consumer’s decision-making process is far more complex than most people realize. Consider some of abortion’s biggest cash supporters:

And, interestingly, most major fuel companies (ExxonMobil, Shell, BP) and banks (Bank of America, Chase, US Bank, Wells Fargo). The reality is: orienting our lives around a full boycott of any business with its money in Planned Parenthood’s pocket is nearly impossible. Read on to learn more.

There are two main ways a company can throw money at the abortion industry – direct donations (i.e. what the companies above are guilty of) and indirect support. The latter occurs when companies facilitate donations to Planned Parenthood from their employees or donating through third parties like United Way.

Obviously, both means of financial support are wrong. Planned Parenthood kills well over 340,000 babies every year, is caught in scandal after scandal, sells fetal body parts, covers up for abusers, and profits off fear and desperation. Whoever, in these many companies, decided to add Planned Parenthood to the “charitable giving” list, needs to re-evaluate.

The Reality of Boycotts: Do They Work?

Worth noting (again) is that Students for Life isn’t telling anyone that avoiding certain businesses due to their support of abortion is silly. It’s not. Every person should follow their moral compass. But there’s more to the big picture that pro-life consumers should consider in order to be fully informed.

Boycotts almost never have an impact on a company’s revenue. The Institute for Policy Research at Northwestern writes:

“According to IPR associate Brayden King, a professor of management and organizations, activists who call for boycotts usually set out “to put financial pressure on a company” by convincing consumers to shop elsewhere. ‘But it turns out that’s not the way that boycotts usually work,’ he explained. ‘The typical boycott doesn’t have much impact on sales revenue.’

‘The no. 1 predictor of what makes a boycott effective is how much media attention it creates, not how many people sign onto a petition or how many consumers it mobilizes,’ he noted. His research shows that the most successful boycotts are those that generate the most media coverage, typically to a single, high-profile company. These headline-grabbing boycotts lead to a greater fall in stock prices and are more likely to cause a company to change its behavior.”

So, quiet, individual decisions not to patronize certain companies does keep the conscience clear (a very valuable thing) but may not do much else. A recent example of a bigger pro-life pseudo-boycott that matches the parameters IPR lays out occurred when Georgia was debating their Heartbeat Bill last year.

Upon learning that Georgia’s legislature was working to pass a pro-life Heartbeat Bill, a monstrous list of companies and celebrities signed on to a letter condemning Georgia and threatening to boycott the entire state. Pro-lifers, in turn, threatened to boycott the entities on the letter. 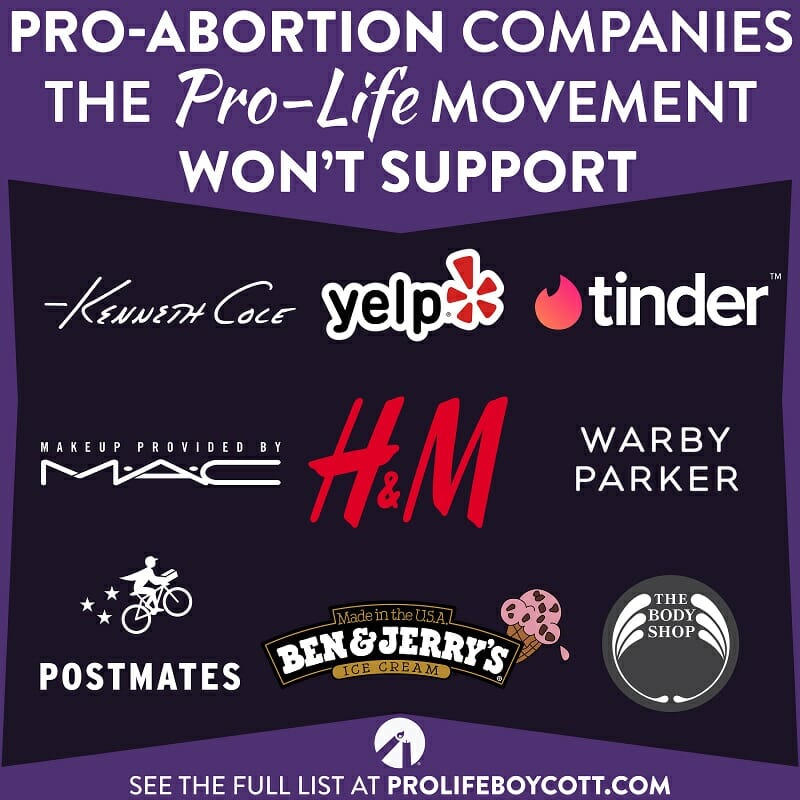 So… Can I Shop at Starbucks or Not?

Here’s our philosophy: there’s only so much time in a day. In the time it would take to find alternatives to the nation’s biggest companies, we could have done something to advance the pro-life cause. We could have sidewalk counseled outside an abortion facility, volunteered at a pregnancy center, organized a protest, or had a mind-changing conversation with a pro-choice person in the time it would’ve taken to ride our bike to work since every gas station seems to finance Planned Parenthood.

Plus, intent matters. Pro-life advocates aren’t ordering from Amazon because we want a percentage of our order to fund abortion (shameless plug, you can select Students for Life of America as your Amazon Smile charity so that a percentage of your order goes to fight abortion).

So make the little decisions where possible. Get ice cream from a local shop instead of Ben & Jerry’s, fly Southwest instead of American Airlines, or buy Duracell over Energizer batteries. But our unwavering effort in the pro-life movement to reduce Planned Parenthood’s influence and make abortion unthinkable is what will have the biggest impact on pro-abortion companies in the long run.