HELENA, MT (01-19-2021) – Students for Life Action/Students for Life of America’s Lucia Morud, Pacific Northwest Regional Coordinator, and Freeman Marshall, a student leader from Montana State University, the largest Students for Life group in the state, testified before the House Judiciary committee today in the first of two days of testimony in favor of four bills designed to protect women and the preborn from predatory abortion industry practices. 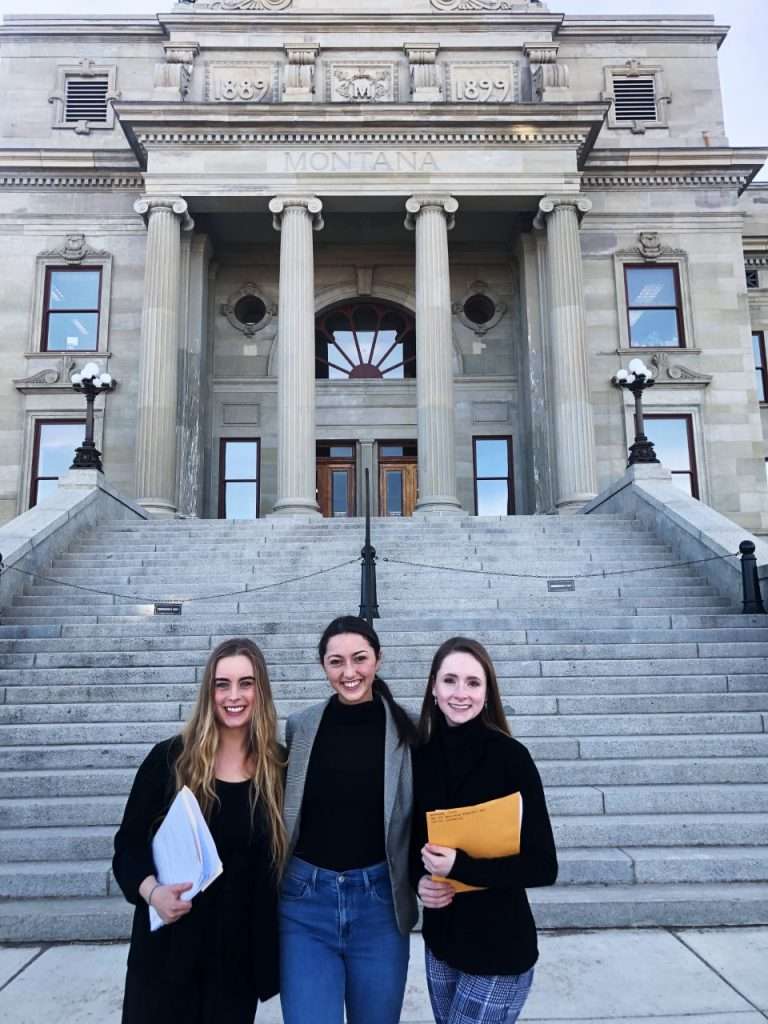 “We stand together today to express our support for our Montana legislators passing House Bill 171: Abortion Inducing Drug Risk Protocol, providing much needed protections from the deadly distribution of life ending drugs, as well as House Bill 136: Establish Pain Capable Unborn Child Protection Act, a limit on abortion after 5 months of pregnancy, at which point abortion is even more dangerous for women and a horrific, painful experience for the preborn.

Students for Life of America has grave concerns about the Chemical Abortion Pill crisis that is sweeping America, now ending lives in more than 40 percent of all abortion, with higher complication rates than surgical abortions. We are here to speak for our generation, having lost 1 in four of our number to abortion, and now we face constant pressure to see abortion as a solution instead of another set of devastating problems.

Young Women are Being Targeted for Chemical Abortion Pill Sales where they Spend their Time: At school and on Their phones

They are targeted on their phones:

During the Covid-19 crisis, Planned Parenthood announced that it would have the capacity to do “telehealth services” in all 50 states… meaning that every phone can become an abortion vendor, capable of distributing Chemical Abortion pills … if the FDA regulations fall without being replaced with high medical standards.

96 percent of 18 to 29-year old’s have cell phones (and the other 4 percent can probably borrow one.)

This kind of anonymous purchase also allows abusers to get the pills, slipping into the food or drink of unsuspecting women.

Preventing the distributing of abortion pills on the phone or on-line will stop a new, deadly and widespread network.

Starting in California, they are being targeted at school.

In California, we saw another new distribution model launch: School healthcare centers as abortion vendors. Over 3 years, SFLA fought against California’s SB 24 (formerly 320) passed last year after we successfully blocked it twice before. It requires publicly funded colleges and universities to distribute Chemical Abortion Pills in school health centers … even though there is no capacity for emergency intervention when something goes wrong.

The Bill Sponsors in California bragged that this is a Beta Test for the nation, and similar bills have been introduced in New York and Massachusetts.

Preventing the distribution of pills on college campuses is vital for preserving the educational purpose of schools and to prevent the injury and deaths of young women medically abandoned by the quick sale of dangerous drugs in an environment ill equipped to help them when things go wrong.

We have more information on the dangers of Chemical Abortion Pills at THIS IS CHEMICAL ABORTION.com, including many stories from women whose identities have been kept anonymous and who have suffered through Chemical Abortions, describing them in their own words. One woman told us, “I wish they told me these pills wouldn’t end the baby’s life. It came out in a sack, with all the limbs and eyes … heart still beating. If I knew that would be the outcome, I would’ve never done it.”

Please help us stop on-line and on the phone Chemical Abortion Pill sales in Montana so that more young women won’t have life-long regrets.

House Bill 136: Establish Pain Capable Unborn Child Protection Act, is the kind of measure that captures bi-partisan support because it addresses the cruelty of abortion.

Allowing an abortion after 5 months of pregnancy, when a baby is increasingly viable and when we know that the child can feel the horrifying pain of abortion is inhumane, unjust and unbearably cruel.

A 2020 Marist/Knights of Columbus Poll shows that 7 in 10 Americans want limits on abortion, including later in pregnancy.  That’s just commonsense as anyone seeing a mother who is 5 months pregnant knows that she carries a child who deserves our care and support.

Thank you for drawing the line here in our state against the dangerous on-line and on-campus distribution of Chemical Abortion Pills as well as deadly late-term abortions, that cause great harm and cruelty.

Stay up to date on the Pro-Life Generation’s engagement in state legislation at https://studentsforlifeaction.org