Students for Life of America/SFLAction says that if a President Biden wants “America United” then Respect the Conscience Rights and Views of Pro-Life Americans    “If Joe Biden truly wants unity, respecting the free speech and conscience rights of Americans, including those of his Church, is essential, along with limiting taxpayer funding of abortion at home and around the world. That’s common ground and a good place to start a conversation,” said SFLAction’s Kristan Hawkins in the Washington Times.    WASHINGTON D.C. (01-20-2021) – On the morning of the severely parred down Inauguration of Joe Biden, Students for Life of America/SFLAction President Kristan Hawkins urged the

& National Black Leaders Join Together, Asking Planned Parenthood’s President to confront the “Systemic Racism” of Abortion and to Renounce the racist legacy of Margaret Sanger

“What cities haven’t allowed in paint on city streets will be displayed on billboards because BLACK PREBORN LIVES MATTER, and we will not be silent,” said Students for Life of America’s Kristan Hawkins.

“As organizations and institutions across the country wrestle with the enduring harm caused by racism in America, it’s about time Planned Parenthood does the same,” Dean Nelson, Frederick Douglass Foundation and Human Coalition Action.

WASHINGTON D.C. (09-01-2020) – During a virtual news conference, Black Preborn Lives Matter partners Students for Life of America and Students for Life Action along with the Frederick Douglass Foundation and Human Coalition Action announced the launch of a series of billboards across the country, calling for President Trump and other pro-life leaders to defund Planned Parenthood to address the wrongs of their racist past and present and to prevent a future in which Black lives are lost disproportionately to abortion. The billboards are the first of those going out across the country, now live in Philadelphia, Detroit, Phoenix, Atlanta, and Charlotte, with the messages BLACK PREBORN LIVES MATTER and PRESIDENT TRUMP, PLANNED PARENTHOOD ABORTS 360 BLACKS EVERY DAY. HELP US. Other billboard messaging may be added during the campaign, click here for updates and to see the designs. The billboards are part of an on-going project involving Black Prolife leaders, from local to national levels, and Students for Life of America and Students for Life Action. 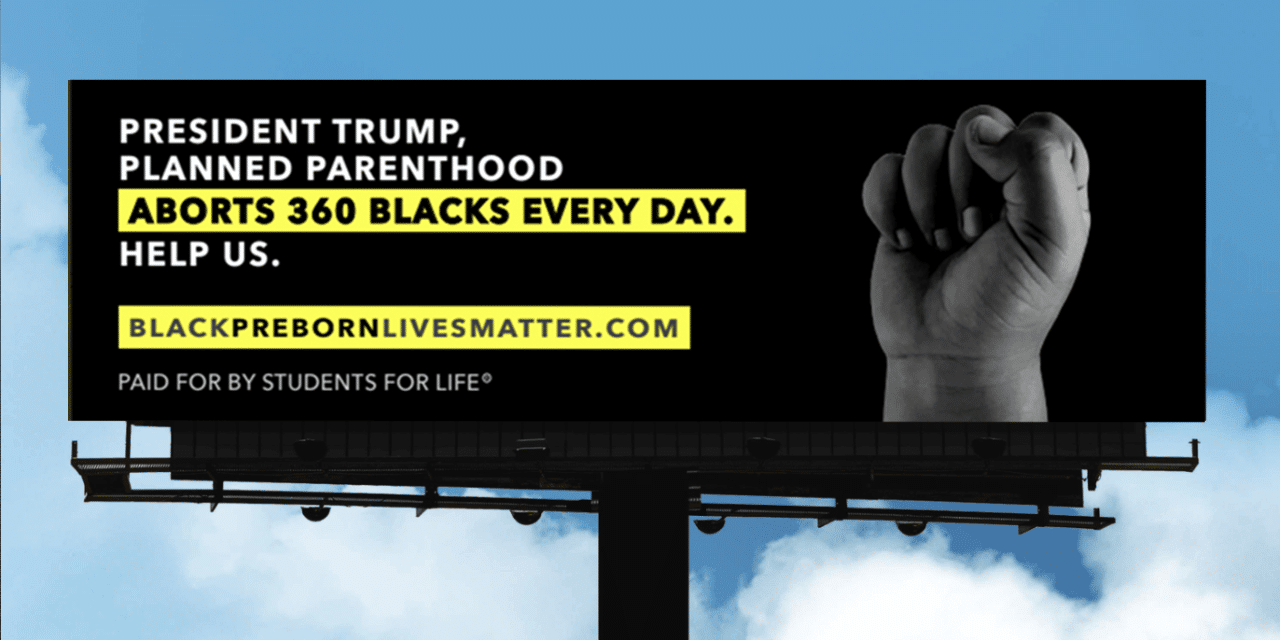 “We are working together to confront the racist past and present of Planned Parenthood and to prevent a racist future in which Black lives are ended through the violence of abortion because of the way in which Planned Parenthood chooses to sell its deadly product,” said Hawkins, president of Students for Life of America and Students for Life Action. 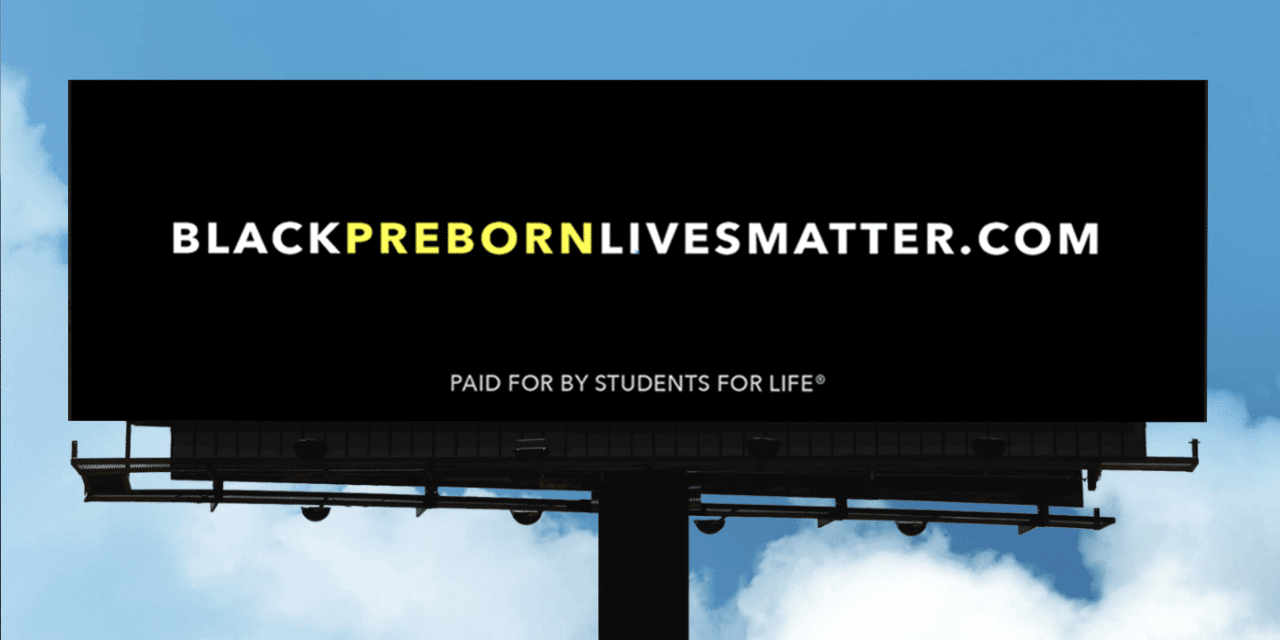 The letter reads in part: “We are asking you to use your position at Planned Parenthood to confront the systemic racism of America’s abortion practices and to publicly renounce the racist legacy of your founder, Margaret Sanger … Planned Parenthood National must renounce the views and legacy of its founder and acknowledge and discontinue its ongoing systemic targeting of Black Americans with abortion facilities.”

Also joining the news event were Catherine Davis of The Restoration Project and Ryan Bomberger of Radiance Foundation, who detailed the racist reality of Planned Parenthood and the need to use media of all kinds to confront their legacy.

“Systemic racism and abortion intersect at Planned Parenthood’s door,” observed Davis. “They have ignored the fact that the passage of the voting and civil rights acts ended the legal targeting of Blacks and other minorities.  Today they have made their Jim Crow-esque targeting and discriminatory treatment of Black employees a part of their mission in defiance of the Constitution and civil rights laws. We call for an end to their illegal acts. We call for the defunding of this organization that has long defied the laws of this nation.”

Consider that though only 13 percent of the female population, African American women make up 38 percent of all reported abortions. Perhaps that is because 4 out of 5 Planned Parenthood vendors are within walking distance of minority-dense neighborhoods, according to a Supreme Court amicus brief. The abortion industry think tank established by Planned Parenthood, the Guttmacher Institute, notes that “the abortion rate for black women is almost five times that for white women.”

The push to defund Planned Parenthood includes more than just their racist marketing, though the impact of abortion on black communities should be enough to cause alarm. Planned Parenthood’s reputation has been tarnished by allegations of Medicare fraud, of failure to report sexual crimes against young girls or girls possibly caught up on sex trafficking, of issues with prescription drugs, health and safety violations, of trafficking in the human remains of broken infant bodies and today allegations for improperly obtained millions of dollars in Paycheck Protection Program loans intended for hardworking small business owners. Planned Parenthood even opposed the Born Alive Abortion Survivors Act, which would guarantee medical care for infants born during botched abortion so that they would not become victims of infanticide. Planned Parenthood’s own employees of color report that the abortion industry marginalizes them, treating minority employees with “microaggressions, tokenization, and racism.” Meanwhile, abortion as an issue “disproportionately affect Black people,” they note.

“How many more reasons do people need for defunding Planned Parenting to investing in life-saving care?” said Hawkins.

Human Coalition is one of the largest pro-life organizations in the nation, operating a growing network of telehealth and brick-and-mortar women’s healthcare centers across the nation. Human Coalition Action is the public policy advocacy 501(c)4 arm of Human Coalition advocating for preborn children by challenging legislators to vote for pro-life policies, informing voters about pro-life candidates, and supporting pro-life legal arguments in the Courts.

Is Students for Life Next on the Social Media Ban List?
Read more +